Literature / The Rape of the Lock
aka: Rape Of The Lock 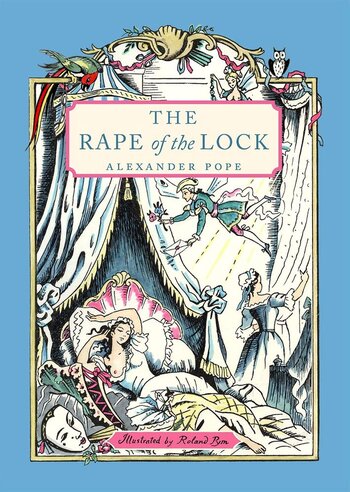 The definitive Mock-Heroic epic, penned by Alexander Pope. The title isn't what you think it means: "Rape" here refers to the word's older meaning as "kidnap", and "lock" refers to a lock of a woman's hair, here taken unwillingly. So get your snickers out of the way now.

In a World… where the flirts, coquettes, and heartbreakers are protected by airy Sylphs, Belinda is the queen bee of her little court, with suitors at her every hand — and none as persistent as the Baron. However, one day Ariel, the chief guard of Belinda's honour, gets a premonition that some calamity will strike. Guards are set on all objects of import — earrings, fans, curls, and petticoats (especially the petticoats) — but, in an unguarded moment over a coffee cup, the sylphs fail to stop the Baron from stealing a lock of hair — the lock of hair that made Belinda's symmetrical coiffure perfect. And so, the Battle of the Sexes ensues. Will Belinda be reconciled to the Baron? Or will ill humor and temper tantrums carry the day?

Regardless, prepare to laugh and be impressed. The Rape of the Lock is considered to be one of the most important works of literature in the English language — important enough that only it and the works of William Shakespeare himself are allowed to provide names for the moons of Uranus according to the International Astronomical Union.

Based on a True Story — in fact, the engagement of Arabella Fermor, a good friend of Pope's, was broken off (and never reconciled) for precisely this reason. Pope was attempting to get her to reconcile to the man who had stolen her hair by both mocking all the Serious Business made about a bit of a curl, and by warning of the unhappiness that comes of being vain and stubborn. He didn't quite get that the problem wasn't about her being "vain and stubborn" but about her intended being a Jerkass who led all his friends to mock, belittle, and ridicule her.

Being over 300 years old, The Rape of the Lock is in the public domain. Wikisource has full text

, as does Project Gutenberg

Alternative Title(s): Rape Of The Lock