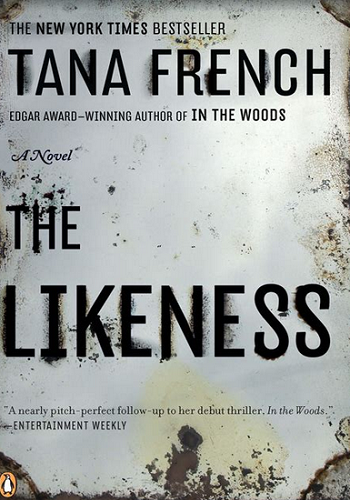 "Some people are little Chernobyls, shimmering with silent, spreading poison: get anywhere near them and every breath you take will wreck you from the inside out."
Advertisement:

The Likeness is a 2008 novel by Irish author Tana French, the second in her Dublin Murder Squad series. Cassie Maddox, a Dublin detective still wrecked from her last case (which is the subject of French's previous novel, In the Woods), is called to what looks to be a rather peaceful cottage, except it's also a crime scene. A dead girl lies on the floor. She looks exactly like Cassie. What's more, she's carrying ID that identifies her as Lexie Madison, an alias that Cassie once used years ago.

Flash forward a few chapters, and Cassie's gone undercover as Lexie, pretending that Lexie was merely knocked unconscious, and begun living with Lexie's housemates, four English postgrads at Trinity College Dublin (Cassie's boss derisively refers to them as the Fantastic Four). Cassie lives Lexie's life for some time, trying to find out whoever Lexie actually was and why she ended up dead. (Yes, Cassie is pretending to be a woman who pretended to be a woman whom Cassie once pretended to be.) But the further she investigates, the more Cassie realizes that she might like Lexie's life more than her own - which will wreck her head even more than when she started.