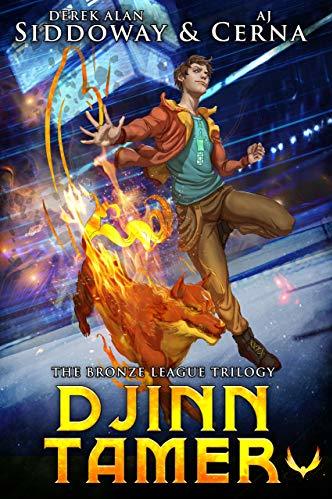 A Boy and his Fire Dog
Advertisement:

17-year-old Jackson Hunt dreams of being a professional Djinn Tamer, however there are a few problems with that. His grandmother and Jackson don’t have enough money for him to get a Djinn. Not to mention ever since his mother, Renown Djinnologist Jennifer Hunt, disappeared on a research trip his grandmother had refused to let him own a Djinn. So, Jackson does his best to toil out his days on the local breeder ranch till he turns 18 and she no longer has a say in the matter. However, when he finds out that their house is about to be foreclosed on Jackson’s plan is forced to speed up. Planning on running away and finding a way to become a Tamer without his grandmother’s knowledge, things are again thrown for a loop when in a hidden compartment in his mother’s study Jackson finds a ring containing a rare dog Djinn, Asena the Lyote. Jackson, thrust into the world of Djinn Taming and Battles, finds out very quickly how hard the world can be as he fights not only for his house but his dreams of being a professional tamer.

Djinn Tamer is a LitRPG novel by Derek Alan Siddoway and AJ Cerna. A slightly more adult variation of many of the mon genre that came before it. Currently only the Bronze League Trilogy is available but the authors have promised more to come.