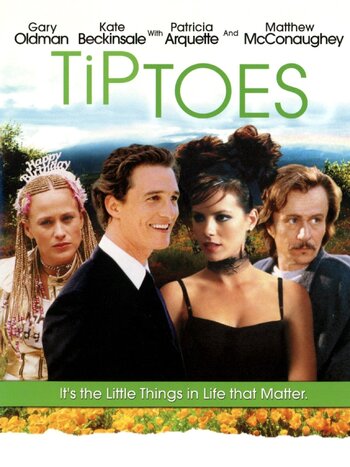 Tiny Tiptoes (better known by the title Tiptoes) is a 2003 drama film that deals with a woman coming to terms with the fact that her boyfriend's family are little people, and her shock when she learns their child (which she becomes pregnant with) may be a little person as well.

Steven (Matthew McConaughey) and Carol (Kate Beckinsale) are in a loving relationship and plan to get married, but things change quickly when she discovers that she's pregnant, prompting Steven to reveal that his family are little people. After she meets his relatives, including his twin brother Rolfe (Gary Oldman), Carol is torn between whether or not to abort her child, all while she begins to learn more about little people culture. At the same time, Rolfe and his best friend, Maurice (Peter Dinklage), campaign for the rights of little people at various conventions.

The film was directed by Matthew Bright, formerly of Oingo Boingo and also known for his film Freeway. Due to a tumultuous production, the film was never released theatrically and instead went direct-to-DVD.