Film / Time of the Wolf 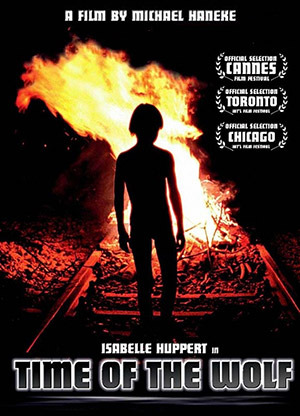 A disaster of some type has occurred, of which the audience only knows that uncontaminated water is scarce and livestock has to be burned. Fleeing the city, the Laurent family arrive at their country home, hoping to find refuge and security, only to discover that it is already occupied by strangers.The family is assaulted by the strangers and forced to leave with no supplies or transport. As they seek help from people they have known in the village the scale of the situation is realized when they are repeatedly turned away. The family makes their way to a train station where they wait with other survivors in the hope that a train will stop for them and take them to a safe place.

The film takes its title from Völuspá, an ancient Norse poem which describes the time before the Ragnarök, the end of the world.