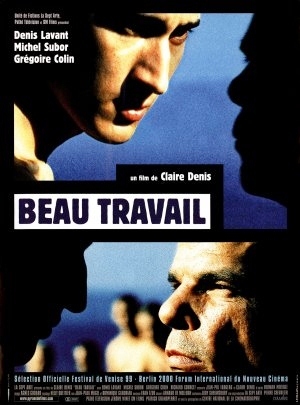 "Maybe freedom begins with remorse."
"He said he was a man without ideals,
a soldier without ambition.
I admired him without knowing why.
He knew I was a perfect Legionnaire,
and he didn't give a damn."
— Galoup on his Commandant, Bruno
Advertisement:

Beau Travail (French for "good work") is a 1999 French film directed and co-written by Claire Denis and loosely based on the novel Billy Budd.

The film centers on the master sergeant Galoup (played by Denis Lavant) recalling via voiceover his memories of being stationed in Djibouti with a group of Foreign French Legion soldiers. As the soldiers train diligently in the harsh elements, one of the new recruits under his command — the promising young Gilles Sentain (played by Gregoire Colin) — catches Galoup's eye. Winning over the whole group with his strong work ethic and enigmatic personality, Galoup struggles to make sense of what Sentain means to him, whether through a perceived envy-driven rivalry, or another kind of connection...

The film is oft regarded by critics as one of the greatest films of all time and is no. 78 on the 2012 Sight and Sound Critic's Poll.

"Sert la bonne cause et meurt."note "Serve the good cause and die."