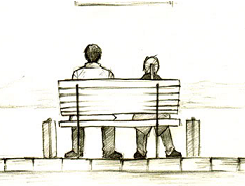 A very well developed pic drabble series which is a Fullmetal Alchemist Conqueror of Shamballa Alternate Universe Fic in which Edward Elric met up with the alter world counterpart for Roy Mustang, Masuta Ichiro, rather than Alfons Heiderich. It chronicles their journey together through Europe as they attempt to help Ed find a way home. In addition to its excellent characterization and story telling, there is plenty of Homoerotic Subtext between Ed and Masuta.