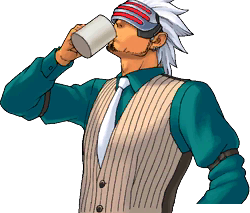 This game is for alcoholic drinks, Godot.note Though given the amount of drinking you'll be doing if you follow these rules, you might wish you were merely using coffee.
You don't have to follow all these rules. Seriously. You might pass out too quickly if you do.
General
Advertisement:
Attorneys
Assistants and Detectives
Trials and Ace Attorney Investigations
Specific cases