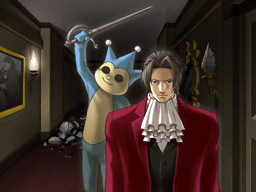 Watch out, Edgeworth!
"It's a comedy of errors, with the violence of Macbeth,
so cute and charming, murder zany, wacky, jokey death!"
— Brentalfloss, Phoenix Wright

Ace Attorney may be an over-the-top series about lawyers, but that doesn't mean that it doesn't have its share of creepy and nightmare-inducing moments...