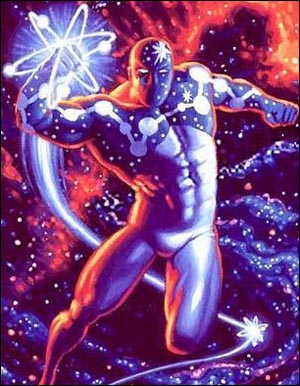 To be precise, Captain Universe is actually a semi-sentient cosmic force called The Unipower, whose main purpose is to maintain the barrier between Earth and another universe in place. Secondarily, it will grant powers to single individuals temporarily so they can fulfill specific missions. Curiously, these missions range everywhere from saving the world to rescuing single, normal individuals.

The concept was introduced in The Micronauts comic book series. The first Captain appeared in issue #8 (August, 1979), created by Bill Mantlo and Michael Golden. It was established there that the universe the heroes came from, The Microverse, was separated from Earth's by a "space wall" that had to be supported on both sides. In the Microverse, it was maintained by the "Enigma Force" that was wielded by Commander Rann, the Micronauts leader; on Earth however, there was no specific wielder for the Enigma Force's counterpart, for some reason. Instead, the Unipower sustained itself by jumping from one person to another. Such a person would gain the powers and costume of Captain Universe, along with knowledge of the mission he or she had to fulfill (but no direct communication with the Unipower); after its completion, the host would return to normal.

Captain Universe is more a plot device than a character, since it has no regular host and the Unipower itself is rarely seen speaking (this varies by writer, however). It's mostly used to power up heroes when needed, or to give normal people a taste of what it's like to be a superhero, even if only for a short while. The concept's most famous use probably was in the Story Arc where Spider-Man gained its powers (but not its costume or knowledge of where they came from, due to a freak accident) leading the hero to gain post-Superman level powers during the Acts of Vengeance Crisis Crossover, where supervillains switched enemies, and thus gave Spidey a chance against much more powerful villains than he usually battled.

The "character" has also starred in at least one miniseries.

Currently, Captain Universe was Tamara Devoux, a young woman who [attracted the malfunctioning Unipower after getting in a car crash and lying in a coma for ten years. She's a member of the Avengers and, as it turns out, a scion of The New Universe. The power has since separated and was recently bonded to Miles Morales to help save the multiverse from the Inheritors.