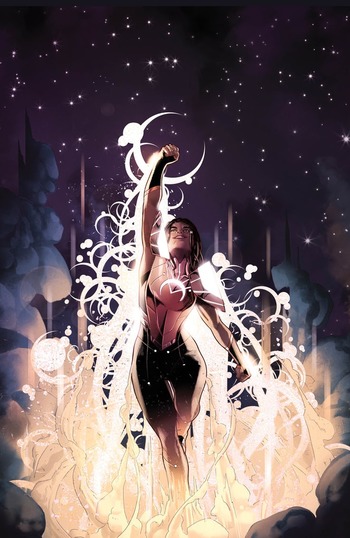 Naomi is a 2019 6-issue comic book miniseries written by Brian Michael Bendis & David Walker and drawn by Jamal Campbell. The book was established as the flagship title of Bendis' own Wonder Comics sub-imprint within DC Universe.

Nothing Exciting Ever Happens Here. That's what pretty much everyone says about the place where Naomi lives. Including the people who live there.

So one day, when Superman crashes through the center of the town fighting Mongul for roughly seventeen seconds, it gets everyone talking for some time. Especially when he returns the next day to help clean up.

A television adaptation of the comics co-produced by Ava DuVernay premiered on January 11, 2022.

Tropes in Naomi include: