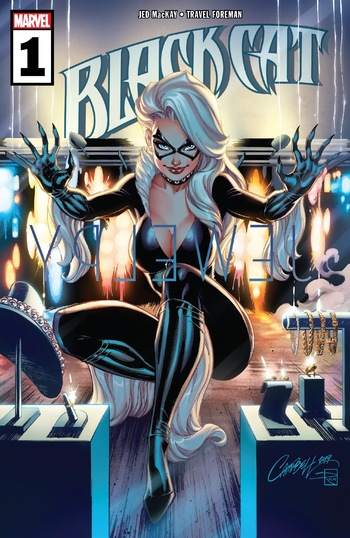 A girl likes to have some jewels... and to steal them!
"Probability" is just a five-dollar word for "luck." And I'm nothing but bad luck, baby.
— Felicia Hardy, Black Cat #3.
Advertisement:

Felicia's old mentor, the Black Fox, returns and asks for her help to commits several heists. Those heists, however, put her in conflict with Odessa Drake, who runs the New York Thieves Guild.

While the series twelfth issue was suspended due to the Covid-19 pandemic, and a new volume that serves as tie-in for King In Black debuted in December of 2020, with the suspended issue repurposed for the new volume. The second volume (and Jed MacKay's run) will come to an end with Giant-Size Black Cat #1 in November 2021.