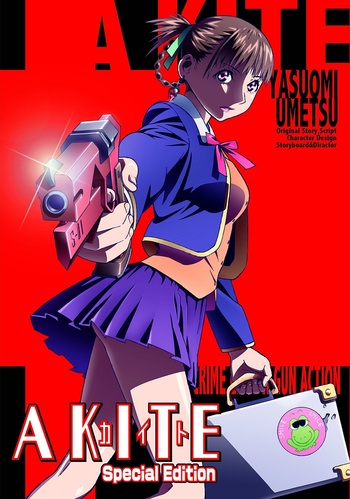 Kite is an Anime series in the action genre, written and directed by Yasuomi Umetsu. Originally released as a two-part Original Video Animation in 1998 by Japanese studio Green Bunny, it has since been edited for release in North America as a single "movie" by Media Blasters (general release) and Kitty Media (Kite: Director's Cut and Kite: Special Edition). The original series was followed in 2008 by a sequel, Kite Liberator.

In Tokyo, a string of bizarre, unsolved murders have the police confounded and the media in a frenzy. The only known connections are the killer's use of exploding bullets, and the fact that each of the victims were famous, wealthy, or powerful individuals. Akai, the lead detective in these cases, knows more than he is letting on. Not only have he and his partner Kanie ordered each of the killings, but many of them have been carried out by his lover and adopted daughter, Sawa.

Under the pretense of "cleaning up the city" by getting rid of corrupt politicians and child molesters that are outside the reach of the law, Akai uses Sawa as his personal assassin. Holding misguided affection for Akai after he "rescued" her as a child from the scene of her parents' murder, Sawa has done his bidding for years without question. When she meets her male counterpart, a young man named Oburi who has been trained by Kanie, Sawa begins to question her role in life and the events that led her there. However, Oburi and Sawa soon find out that giving up their current lives will be no easy task, for Akai is not the kind of man that will take "no" for an answer.

Like Umetzu's similar work Mezzo Forte, it has received three releases in North America: a General Release with most of the sexual content removed, a subsequent Director's Cut that leaves most of the controversial material intact, and a Special Edition that is presented as being totally uncut.

It's followed by a sequel, Kite Liberator.

This page is for the censored version only.

Has a Live-Action Adaptation directed by Ralph Ziman.

The OVA contains examples of: