"Looking back on it, three years isn't that long."
— Nezha 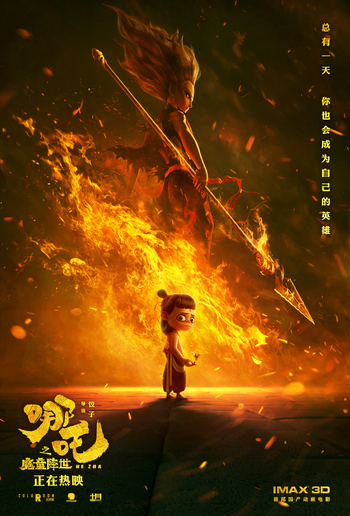 "If fate is unfair, then fight it to the very end."

The film was released in China exclusively in IMAX and China Film Giant Screen theatres on 13 July 2019, followed by other theatres on 26 July, distributed by Beijing Enlight Pictures. The first Chinese-produced animated feature released in IMAX format, it began a North American release on 29 August 2019 in select IMAX 3D theatres, before a nationwide rollout on 6 September. An English dub was released on 31 January 2020.

A sequel, Jiang Ziya (also known as Legend of Deification), was scheduled for release on 25 January 2020 but was cancelled after the COVID-19 outbreak. The film was released globally on 1 October 2020. A dub was issued alongside the digital release on 9 February 2021.