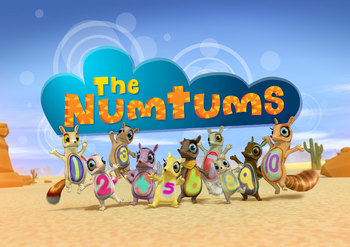 "It's a Number-tumber day!"note From left to right, as their bellies indicate: Bendy Go, Dar Dar, Champer, Gladdy, Little Sandy, Flinders, Humpty Do, Coogee, Hobart, and Nimbim.
"Here come the Numtums
They're furry and they're fun
Here come the Numtums
Let's start with number one!"
— Title Theme Tune
Advertisement:

The Numtums is a British educational show created by Barry Quinn for CBeebies. It spanned three series which lasted from 2012-2014. The three series revolve around a group of ten Numbats each representing a number between one and ten.

In the first series, one Numtum is chosen to be the subject of each episode. After the Numtum is chosen, the episode plays several short clips which teach about the number that Numtum represents.

In the second series, the series got a Retool as the main characters are named Bendy Go, Dar Dar, Champer, Gladdy, Little Sandy, Flinders, Humpty Do, Coogee, Hobart, and Nimbim. They live out in an outback area named Gumnut Gorge. Living with them are an echidna named Billy and a lyrebird named Larry.

Bendy Go, Champer, Humpty Do, Little Sandy, and Dar Dar make up a group called The Numpups. They are all but fans of an in-universe cartoon called Super Numtum, and are often inspired by the show to go on adventures around Gumnut Gorge while learning about simple math, such as basic addition and counting.

The third series is more of less the same, but is aimed at older audiences and used more complex concepts such as shapes and numbers beyond ten.