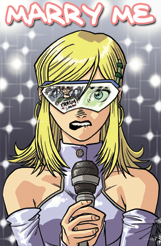 This is the story of three people and a sign.
Advertisement:

is a webcomic created and written by Bobby Crosby (+EV

) and illustrated by Remy "Eisu" Mokhtar (No Pink Ponies

). It depicts the life of Stasia, a pop-idol of some renown who fills whatever arena she sings in. On the personal front, though, it's less of a sunshine story. Stasia's love life has turned out less than satisfactory, and she is not eager to get back into the dating scene again. Depressed and unenthusiastic, she prepares for her last show of the year.

Enter Guy. Or in fact, enter Parker, dragging Guy with her by his ear. Parker is a die-hard Stasia fan and has brought along a sign that she is intent on getting Stasia's autograph on. Guy can't understand the appeal of her music (or any other parts of her). As the show progresses, nature calls to Parker. Unfortunately, this may make her miss the big moment, but she makes Guy swear to present the sign if she doesn't make it back in time. Being a nice guy, he does. He probably shouldn't have.

Marry Me is a plot-heavy romantic comedy in its purest form. You will find many romance tropes roaming about, and while the story is original in itself, the form is easily recognizable and rather predictable. That doesn't stop it from being entertaining, however.

A film adaptation of the webcomic starring Jennifer Lopez and Owen Wilson is scheduled for release in 2022 by Universal Pictures.

The comic is currently complete. A mirror can be found here