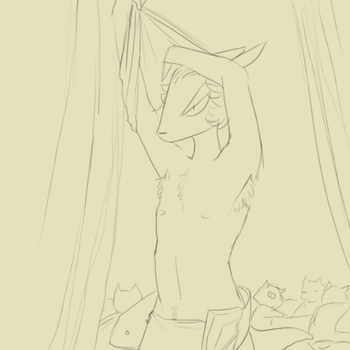 There is a sensible, rational, and perfectly reasonable cause for this.

An imageboard-based RPG styled as a text adventure, similar in style and pace to the game to start the genre, Ruby Quest, created and run by a man who goes by the name "Reaver," which may sound familiar.

It begins with a leferran named Ridder telling a story of how Baron Malto's Kingdom collapsed.He then picks a fight with someone, but stands down because he heard that the person is needed for a harvest. He then asks for rumors of monsters, which points him to the direction of Salamander Tower. Once there, he learns that a paladin was butchering topiaries because of an overpowering evil. He then goes on to defeat this evil.

The archives can be easily accessed here

. It shares a universe with Dive Quest.