"There is a large VOID here, ripe with creative potential. the void beckons you to engage it- somehow, as a distant, collective consciousness you know two things.
your TCP LIMIT is 1
you can CREATE a TINY CAT PERSON by presenting the void with a WORD. any noun will do."
—The first page 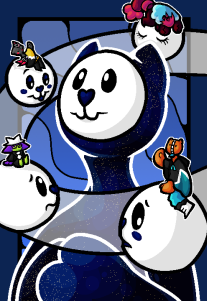 is an Interactive Comic by the Homebrew Deviants

, featuring a game in which tiny cat people (or TCPs) are spawned, and must be taken care of by the player. The readers take the place of deity-in-training playing the game, and have the power to create anything they can think of in the void the game starts in, as well as teach their cats new things and direct their actions. Moreover, the game is a multiplayer one, with other gods playing in the same session, and the game can only be won if everybody agrees to an alliance... or kills off every opposing players' TCPs.

The story was originally started March 2016 on TGchan

, but since then, additional threads have been started, one on the Eagle Time

, all happening concurrently with eachother and taking place within the greater universe of Morbit. Each thread plays as its own deity, which is explained to be a collective, not a consensus, hence often conflicting voices and decision-making.

The game itself plays as part Real-Time Strategy, part Sandbox, letting players do almost anything on their own territory but restricting their influence outside of it. As the game advances, the maximum number of TCPs allowed in the session increases, and as the game can only end once every deity has 5, the player must make alliances and decide their battlelines quickly.

Individual sessions will be added once their deity recieves a name. TGchan's deity is The Void (Voidsy to their friends).