Web Animation / Everything Is Broken
aka: HTF Plus 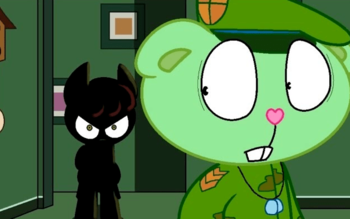 "FLIPPY!"
"This isn't just a game, something big is coming. When it's over, you will know TRUE TERROR!"
- FI Creepybloom, part 10
Everything Is Broken

(Rhianna Dearston). It revolves around Flippy and other characters of Happy Tree Friends meeting mainly with My Little Pony: Friendship Is Magic fan horror games and Creepypastas by playing said games, which soon start manifesting into their reality to kill them. Amnesia: The Dark Descent also features. Works the series has crossed over are the following:
Advertisement:

Everything Is Broken provides examples of:

Advertisement:
Scootaloo: I thought you loved me!
RF Rainbow Dash: I did love you! I tried so hard for you! In hopes you would pass your test! You had it in you, kid. It was up to you to save yourself!