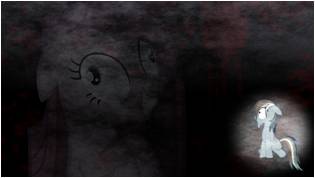 Hey, Rainbow Dash!
How are you?note Art by The Sharp 0ne

What are you doing here, Troper? It's dangerous here... You better leave...

Dreamy Rainbow is a series of short, Creepypasta fangames of My Little Pony: Friendship Is Magic created by PokeGamer2011; inspired by the Luna Game, and often considered to be its Spiritual Successor.

There has also been a Fan Fiction based on the games, which can be found here