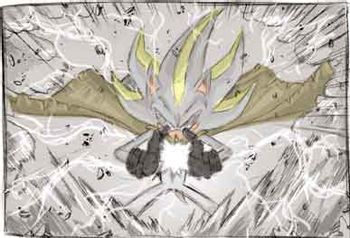 I recoloured this pic from the Web Comic "Chaos Diamonds 3"

I'll give it a shot, then. My name is, for the purposes of editing tropes, Shadic the Hedgehog. It's pronounced like "Shade-ic" by the way, I tend to do odd pronunciations a lot. I also tend to spell things the British way, even though I'm a born-and-raised American. I've got an account on fanfiction.net

, where I had to add "Author" to the end of my name because someone else apparently had it, and for some reason they won't let me change it, even though I can't find the other guy with my name.

As for anything else, I have what is known as Asperger's Syndrome (I always try to pronounce the first "s" like a "z" just to keep immature jokes at bay. Doesn't always work). My obsessions are Anime, Manga, Books, RPGs, and writing. I have since narrowed this category down to "stories in general." Currently trying to finish up my first story, A Step Onto Chronos, on fanfiction.net write several stories at once on fanfiction.net, but also trying to start up an original novel series called "Origin" with each book having a title afterwords like "Book of Water" or "Book of Life," which would make the whole title of one of the books, "Origin: Book of Water."

I also adore heat and darkness, with my favourite colours being black and red. For completely unrelated reasons, I assure you. I like darkness because I'm photosensitive (or is it the other way around?), and I like Black and Red because Shadow The Hedgehog is one of my favourite protagonist characters and Kefka is both my favourite and my most hated video game character. I'm also a firm believer in Dark Is Not Evil and Light Is Not Good, so I tend to refer to good and evil as "spiritual" Light and Darkness, and the aforementioned tropes with "physical" light and darkness.

Due to my love of darkness (and the fact that I pop my collars up whenever possible), my best friend's friends have taken to calling me "Dracula" or "Drac" for short. After mentioning this at work one day (McDonald's at the time, btw), one of the managers decided to tell everyone else. Not that I mind, since two of my top ten characters are related to Dracula. First, there's Master Alucard who is Dracula, then Lord Alucard who is the Dhampyr son of Dracula.

My goal in life is to become a Voice Actor. Whether for anime or games or just plain old American cartoons makes no difference. I just want to play a part.

I tend to get easily distracted by this site, making it a bit of an Attention Deficit... Ooh, Shiny! for me, but I'm working on it. Which is why I'm making a contributor page.

I'm on the Troper Dating Service page, and the relevant pages of Troper Demographics and Where Are You From.

Tropes what apply to me (so far as I can tell):