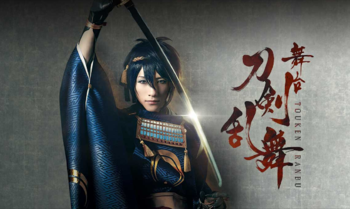 Historical revisionists, seeking to change the course of history, have begun their offensive in the past.The government at the time has dispatched a saniwa into the past to protect history.The saniwa, being able to sense spiritual energy, was able to bring out the tsukumogami spirits residing within swords.Together with the "Touken Danshi," the saniwa has dedicated themselves to fighting to protect the course of history.

One of two distinct stage continuities, Touken Ranbu Stageplay (or Tousute as it's abbreviated) is a series of Stage Plays adapted from the widely popular Touken Ranbu franchise. Each stage play focuses on a new story, with few recurring characters, namely Mikazuki Munechikanote  Save for the stageplays set before he manifested and Yamanbagiri Kunihiro being a constant staple in them. It all comes together in the fifth stage play, Hiden: Yui no Me no Hototogisu.

A four episode docu-series set around the production of the stage play was released and received a Blu-ray release on December 9th, 2018.

2020 finally saw to a crossover between the stage play and musical continuities. Titled Touken Ranbu: Daienren, the two citadels were expected to collide in August 2020 at Tokyo Dome. Unfortunately, due to the COVID-19 Pandemic, it was cancelled and replaced with a cast talk event.

The stage play series also saw to an animated adaptation. Kyoden was the first of the plays announced for an anime retelling in 2022.