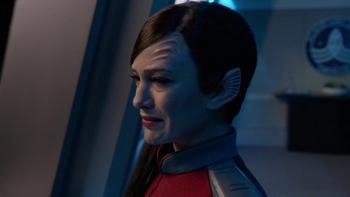 "All he wanted was love. And yet because of you, his life is over. For no reason, except your own prejudice."
Some of the most powerful moments Seth MacFarlane ever put on screen are on this show.

open/close all folders
Season 1
About a Girl

If the Stars Should Appear

Nothing Left On Earth Excepting Fishes

All The World is Birthday Cake

The Road Not Taken