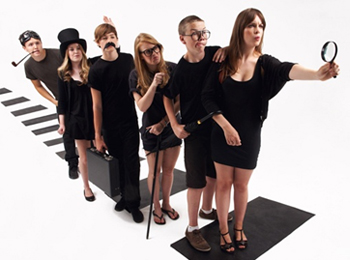 School of Comedy is a British Sketch Comedy, starring young British Comics; most notably Will Poulter, Jack Harries and Beth Rylance. The show ran for two six-episode series in 2009 and 2010 on E4, beginning as a run of massively successful sell-out shows at the Edinburgh Fringe Festival. The range of characters is extensive, including a pair of South African security guards and a homosexual couple in the '40s (both Poulter and Rylance).

The show is possibly the greatest aversion of a Dawson Casting as, in the same style as Bugsy Malone, all the characters are adults but are played by a group of 11-to-15-year-olds. The show was also given a guidance warning (18+) and had to be shown after the watershed, though it was partially written by the entirely under-age cast.

Tropes in School of Comedy