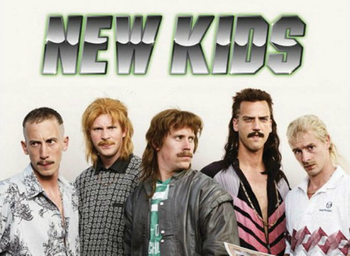 New Kids is a series of comedy sketches from the Netherlands about five antisocial youths from the village of Maaskantje who drive around in a tacky green Opel Manta, listen to happy hardcore, and have a very outdated fashion sense. Their first appearance was on the sketch series "De Pulpshow", but eventually grew into its own series of shorts on Comedy Central. Shortly thereafter, two films based on New Kids were released, New Kids: Turbo and New Kids: Nitro. The creators of the series, Flip van der Kuil and Steffan Haars, who both played characters on the series, have ended the series, but nevertheless still remains a staple in Dutch media.

Note: Not to be confused with the ones on the block.