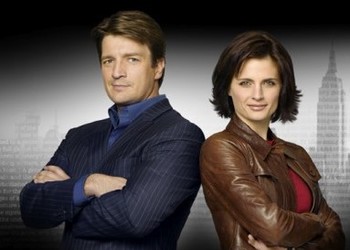 From left to right: Richard Castle, a ludicrous amount of sexual tension, and Kate Beckett.
"I often say that Castle is Moonlighting meets Murder, She Wrote having not really remembered Moonlighting and never having actually seen Murder She Wrote."
— Nathan Fillion as quoted here

Castle is a Police Procedural dramedy series, created by Andrew W. Marlowe and starring Nathan Fillion and Stana Katic, which aired on ABC from 2009–16. It really can be seen as a combination of Moonlighting and Murder, She Wrote, albeit served with a generous helping of Law & Order and seasoned liberally with Nathan Fillion's natural wise-ass charm.

Fillion plays famous mystery novelist Richard Castle (an Expy of horror/suspense novelist Stephen King, according to Word of God), who begins the show having killed off his most famous main character and suffering from a severe case of writer's block.

After a killer begins to recreate murder scenes from his books, Castle is brought in to consult on the case by Detective Kate Beckett (Katic) of the NYPD. An obsessive fan is arrested, but Castle is bothered by how quickly and easily he was caught; following his writer's instincts, Castle correctly intuits that the fan was framed and helps Beckett to catch the real murderer.

Smitten by the idea of using his knowledge of criminal methodology to solve real crimes (and a bit more enamored with Beckett, who becomes the inspiration for his next main character), Castle pulls some strings and gets permission to work alongside Beckett and the NYPD as "research" for his next book. With Castle's analytical instincts (and over-active imagination) and Beckett's years of experience, They Fight Crime!.

Two of Rick Castle's works in the show have been defictionalized, the Nikki Heat novels and the Derrick Storm comic book adaptation.

The show has a recap page, a shout out page, and its own wiki.

Example of:
Bad to the Last Drop