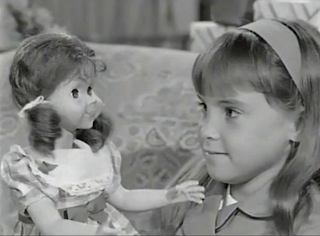 My name is Talky Tina, and I love you very much.
Rod Serling: Talky Tina—a doll that does everything, a lifelike creation of plastic and springs and painted smile. To Erich Streator, she is a most unwelcome addition to his household, but without her, he'd never enter the Twilight Zone.
Advertisement:

It is little Christie's birthday, and her mother Annabelle gives her a large box wrapped in pretty paper while her stepfather Erich (Telly Savalas) watches, looking less than thrilled. Christie is thrilled to discover that the box contains "Talky Tina," a doll that repeats "My name is Talky Tina, and I love you very much!" Annabelle is thrilled with her daughter's response, but an disgruntled Erich demands to know how much it cost. Annabelle says Christie has wanted this doll for months and that she put it on their credit account, which only infuriates him further. Erich angrily states that Christie does not need another doll. Christie flees the room, leaving Talky Tina behind. Annabelle follows Christie, and Erich examines the doll. He winds the key on the back of the doll and hears it say:

"My name is Talky Tina and I don't think I like you."

He winds the key again and the doll says:

"My name is Talky Tina, and I think I could even hate you".

At hearing this, he throws the doll against the wall across the room.

Annabelle re-enters, and we learn that Erich is actually Christie's stepfather and is bitter because he cannot sire children; further, it is implied that Annabelle did not even tell him she had a daughter until after they were married. Annabelle pleads with Erich to be kinder to Christie. At the dinner table, Christie pretends to feed Tina. Erich becomes annoyed, and Annabelle declares that Tina is good for Christie, that it gives her someone to play with. Erich still believes Annabelle bought Tina as a reminder they cannot have children of their own. Erich catches the doll winking at him, while the others are looking elsewhere at the table.

Left alone with the doll, Erich hears it say "My name is Talky Tina and I'm beginning to hate you." He replies, "My name is Erich Streator, and I'm going to get rid of you." Tina exclaims "You wouldn't dare! Annabelle would hate you, Christie would hate you, and I would hate you." Erich places a match next to Tina, who gasps. He says, "Then you have feelings!" The doll replies, "Doesn't everything?" Erich accuses Annabelle of placing a walkie-talkie in Tina and speaking through the doll to "get back at him." She, of course, denies it.

Finding the doll, Erich goes into the garage and places it in a trash can with a lid. When Christie seeks the doll, he tells her he doesn't know where it is. Later, the telephone rings. Erich answers and the voice on the other end says:

"My name is Talky Tina, and I'm going to kill you."

He checks the trash can and is startled to find Tina gone. He again accuses Annabelle of teaming up with Christie to frighten him. He declares "Will the two of you stop it?!" ; she, worried and baffled by his seemingly irrational accusations and suddenly insane behavior, pleadingly denies it. Erich finds Tina in Christie's bed. Christie is asleep, but the doll speaks to awaken her. Erich confiscates the doll as Christie cries and Annabelle rushes in. Erich says "The doll was in her bed. She's the one that's been doing it." Christie begs "Daddy, please!", and Erich yells "I'm not your Daddy!"

As Annabelle desperately tries to reason with Erich, he starts to come to the chilling realization that neither she nor Christie are the source of Tina's taunts. It is something unexplained and frightening. Now knowing he must destroy the doll to save his life, he returns to the garage intent on destroying the doll. He first places the doll's head into a vice and tightens it, but the doll only looks at him and laughs. He then tries to use the blow torch to burn it, but the torch keeps extinguishing before it reaches the doll. He then attempts to use the table saw on it; however, that only throws up sparks. While he tries to destroy the doll, Annabelle walks into the garage. When she tries to stop him, believing him to be mad in destroying what is only a child's toy, he angrily pushes her away. After Annabelle flees the garage, Erich looks at the doll's neck, only to find the neck to have not even a scratch on it.

Realizing he is unable to damage the doll, he puts it into a burlap sack and ties a cord around it, then throws the doll back into the trash can. As he places three heavy bricks on top of the can's lid, he hears the doll laugh. He returns to his bedroom to find Annabelle packing to leave. "How could I live with you after what you've done?" "I had to", Erich insists. "You had to, to show your hatred towards me and for Christie!", she snaps. She states his need to see a psychiatrist. Erich insists the doll was talking to him, but offers to return it. She agrees to stay. Returning to the trash can, he is relieved to see Tina still there. As he retrieves it from the can, it says "My name is Talky Tina, and I don't forgive you!" Erich hushes "Shut up, shut up!", and goes back to Christie's bedroom to hand her the doll reluctantly.

Later that night, Erich is awakened in bed by muffled noises outside the closed bedroom door. Telling Annabelle to stay in the bedroom, he goes out of the bedroom to investigate. He looks into Christie's room to see Tina gone. He starts to walk down the stairs, but trips on Tina, lying on one of the steps, and tumbles uncontrolled down the long stairway. Tina falls down to the bottom of the stairs, landing inches away from where Erich lies dying. Erich, with just enough fading strength to open his eyes, sees Tina looking at him - as his vanquisher. He then closes his eyes and dies. Annabelle screams "Erich!" and runs down the stairs. Kneeling over Erich's body, she picks up Tina who chillingly warns her:

"My name is Talky Tina...and you better be nice to me!"

Annabelle, in stunned horror at realizing the doll's true, evil nature, drops the doll to the ground.

Rod Serling: Of course, we all know dolls can't really talk and they certainly can't commit murder. But to a child caught in the middle of turmoil and conflict, a doll can become many things: friend, defender, guardian. Especially a doll like Talky Tina, who did talk and did commit murder in the misty region of The Twilight Zone.