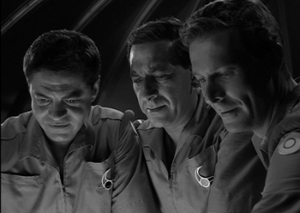 "Captain, something glittered down there..."
Rod Serling: Picture of the spaceship E-89, cruising above the thirteenth planet of star system fifty-one, the year 1997. In a little while, supposedly, the ship will be landed and specimens taken: vegetable, mineral and, if any, animal. These will be brought back to overpopulated Earth, where technicians will evaluate them and, if everything is satisfactory, stamp their findings with the word 'inhabitable' and open up yet another planet for colonization. These are the things that are supposed to happen...Picture of the crew of the spaceship E-89 - Captain Ross, Lieutenant Mason, Lieutenant Carter; three men who have just reached a place which is as far from home as they will ever be. Three men who, in a matter of minutes, will be plunged into the darkest nightmare reaches... of the Twilight Zone.
Advertisement:

A trio of astronauts - Ross (Jack Klugman), Mason (Ross Martin) and Carter (Frederick Beir) - come across what appears to be evidence of intelligent life on an alien world. Upon investigation, it turns out that the ship they spotted is identical to their own ship, except that it has been destroyed in a crash... and inside it are what appear to be their own dead bodies. Further complications arise and the three men end up struggling, sometimes against each other, to try and figure out what's happening to them.

Rod Serling: Picture of a man who will not see anything he does not choose to see, including his own death - a man of such indomitable will that even the two men beneath his command are not allowed to see the truth. Which truth is: that they are no longer among the living. That the movements they make and the words they speak have all been made and spoken countless times before, and will be made and spoken countless times again, perhaps even unto eternity. Picture of a latter-day Flying Dutchman sailing into the Twilight Zone.