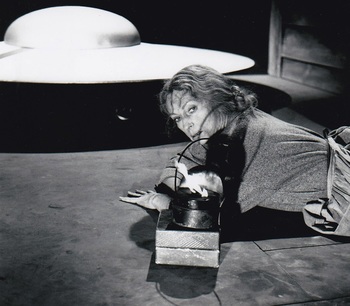 Units ARE to scale!
Rod Serling: This is one of the out-of-the-way places, the unvisited places, bleak, wasted, dying. This is a farmhouse, handmade, crude, a house without electricity or gas, a house untouched by progress. This is the woman who lives in the house, a woman who's been alone for many years, a strong, simple woman whose only problem up until this moment has been that of acquiring enough food to eat, a woman about to face terror which is even now coming at her from the Twilight Zone.
Advertisement:

A woman (Agnes Moorehead) living in an old shack with no modern appliances is cleaning up her house for the night. Suddenly, she hears a loud noise coming from above her and after it drones on for a little while, it stops.

The woman goes up to her bedroom and hears something on the roof. On the top she finds a small UFO that drops down a stairwell and a tiny alien in a spacesuit emerges. Terrified, the woman goes back into her shack and starts hiding.

She hides in behind the hatch only for the alien to follow her into there. She opens a hatch which it falls down and she closes it.

After some time she goes back down terrified that there is another alien there shooting at her. And when she gets back to the inside she finds a small instrument running on electricity and both bruises and welts on her arm, face and chest from where she was shot.

She finds one alien back in her bedroom so she tries to hide from it until she gets a broom to hunt it down. After prodding around, she finds an alien behind her door.

The woman continues to hide until she finds a knife. Once again said alien has followed her and hid in a cabinet, which she promptly closes, but she hears it break out.

As she's retreating, one alien attacks her foot with a knife. Screaming in pain, she now realizes these aliens intend harm on her.

She decides to end it by capturing one of the aliens firing at her in her bed sheet and beating it on her dresser till it dies.

She finds the other alien who blew a hole through her wall prompting her to follow it to the roof.

The woman goes to the roof with a hatchet and starts beating the UFO to scrap metal. After no dialogue the whole episode, we hear the commander of the spaceship notifying central control that the planet is inhabited by giants and this makes the woman beat it harder despite them saying they have no counter attack. After a few final swings, the UFO has been destroyed.

As the woman sags in relief, the audience finally gets a clear look at the damaged ship, and the alien writing on it: U.S Air Force Space Probe No. 1. The spacesuited aliens were humans, and the woman a giantess.

Rod Serling: These are the invaders. The tiny people from the tiny place called Earth, who would take the giant step across the sky to the question marks that sparkle and beckon from the vastness of the universe only to be imagined. The invaders, who learned that a one-way ticket to the stars beyond has the ultimate price tag. And we have just seen it entered in a ledger that covers all the transactions of the universe, a bill stamped 'paid in full,' and to be found on file in the Twilight Zone.