We Are Grounders Part 2 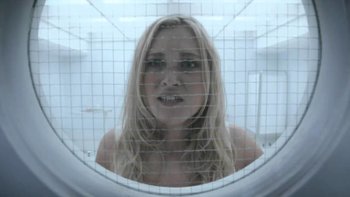 In the drop ship at the camp, Clarke cauterizes Raven's gunshot wound caused by Murphy). Bellamy flips through Lincoln's journal and comes to a drawing of a Reaper and asks if the Reapers might help them fight the incoming Grounders. Clarke tells him it is not an option. She then tells Raven that she cannot walk with the bullet still inside her and Finn goes to get a gurney. Bellamy calls Finn a coward for wanting to leave and Clarke interrupts, telling them it is time to go. Finn leaves and Clarke tells Bellamy she needs Bellamy with them because the Delinquents are willing to fight and die for Bellamy. Outside, on their way out of the camp, Bellamy mentions there are eighteen dead and Clarke tells him there are eighty-two people who are still alive and they did good.

Later, after the delinquents have begun their march to the sea, Octavia brings everyone to a halt, sensing something. A blade comes flying out through the trees and embeds in Drew's head. Jasper screams out, "Grounders!" and all of the delinquents flee back behind the walls of the camp. Clarke realizes that they are doing exactly what the Grounders want them to do: returning to the camp so that they are back in place for the assault. With the Grounder scouts already outside, Clarke realizes it is not safe for them to try and leave camp again and they need to stay and fight. Bellamy tells the gunners to get to their posts and to close the gates. Octavia takes off with the gunners and Bellamy stops her, telling her she's not a gunner. She tells him she's a Grounder, like he said.

On the Ark, Sinclair informs Jaha, Kane, and the other inhabitants of the Ark about the workings and possible consequences of bringing the Ark to Earth, explaining that some parts of the Ark will be destroyed when entering the atmosphere along with the people inside. Jaha tells the Station Representatives that they have no other choice if they do not want them all to die.

Back on Earth, Clarke and Finn are underneath the drop ship, looking for it's ignition system, when Raven reveals that she cannot feel her legs anymore. Clarke discovers that the bullet is in Raven’s spine and that she is bleeding internally. Finn suggests going to Lincoln's cave to get some of the coagulant stuff the Grounders use and leaves to go get it.

On the Ark, everyone is strapped into different stations of the Ark. Jaha gives the Traveler's Blessing across the PA and tells Sinclair to begin their journey back to earth. Sinclair tries to remotely separate the Ark’s stations from GoSci and the Earth Monitoring Station with explosives so they can then use the Ark’s thrusters to blast them towards Earth, but the remote detonation fails. Sinclair informs Jaha that someone will have to manually detonate the bombs and stay behind. Kane volunteers and is ready to leave. Abby asks how much air Kane will have. Sinclair tells her that Kane will have one week, two weeks at most. Suddenly, the bombs explode, shaking the Ark. Jaha tells Abby from Earth Monitoring Station that she will see her daughter soon. The Ark’s stations separate from GoSci and head for Earth as the thrusters activate.

On the outsides of the camp, Grounders start to appear. Bellamy joins Miller and Monroe in a foxhole as other gunners start reporting Grounders moving across their lines of vision. Bellamy then sees Grounders moving around and Monroe and Miller start firing as Bellamy tells them to hold their fire but they are already out of ammo. Meanwhile, Clarke searches for an orange wire that is the drop ship's ignition. When Clarke finds the wire she discovers it to be broken. Raven asks Clarke if she knows how to splice a wire. Over the walkie-talkie Jasper informs Raven and Clarke that the landmines are working. Raven realizes Jasper can splice a wire. Clarke calls for Jasper to get to the drop ship. Outside, in the west fox hole, Jasper realizes the Grounders are drawing their fire to deplete their ammunition and he tells the gunners to stop firing. Bellamy orders the gunners to not shoot unless the Grounders are directly attacking.

In the woods, the Grounder troops lead by Tristan and Anya have one of the walkie-talkies and hears Bellamy’s commands while they have Murphy tied to a tree. The Grounder general, Tristan, stabs Murphy in the leg for not telling him about the mine field, and decides to go in for the attack. When the Grounders finally attack their foxhole, Monroe flees, Miller is hit in the shoulder with a spear, and Bellamy is knocked down. The Grounder who knocked Bellamy down tries to choke him but his head is impaled by a sword as Octavia saves Bellamy. Octavia is hit in the thigh with an arrow quickly after and Bellamy tries to carry her back to the drop ship.

Finn gets to Lincoln’s cave and looks for the coagulant. Lincoln appears and gives him the coagulant and hears the battle over the radio. He decides to go with Finn to the camp. Finn sees one of Lincoln’s sketches of a Reaper and is reminded of Bellamy's idea to use them.

Clarke and Jasper are underneath the drop ship and Clarke asks Raven to repeat the direction but receives no response. When Clarke goes to check on her, she sees Raven has lost consciousness. One of the gunners announces through the walkie-talkie that the Grounders have broken through, Clarke tells Jasper to finish the wiring of the ignition system while she goes outside to check out the situation. She tells the gunners they need more time and to stay at their posts and hold off the Grounders while the others get inside the drop ship. A bright light suddenly lights up the night sky, distracting everyone on the ground. Clarke realizes that it is the Ark, entering the atmosphere. One of the Ark stations explodes, killing everyone inside.

Finn and Lincoln arrive back at the camp, having lead the Reapers to Anya and Tristan and the other Grounder warriors outside the camp. The Reapers and Grounders engage in a violent battle as Finn escapes into the camp through the tunnel entrance.

Lincoln comes across Octavia and Bellamy, and says he can help her but they must leave now. Bellamy tells Octavia that his life did not end when Octavia was born, but that it hadn't started until then. Bellamy tells Lincoln to keep Octavia safe. Lincoln carries a crying Octavia away while Bellamy hides behind a tree near the battling Grounders and Reapers. Anya, Tristan, and their warriors succeed in killing the Reapers and they turn toward the camp's wall.

Inside the drop ship, Clarke injects Raven with the coagulant. Miller comes in and informs them that the Grounders are taking down the gate. Jasper announces that he is ready with the ignition system. The Grounders breach the gate and Clarke yells at the people outside to get inside the drop ship. Bellamy returns through the secret entrance but sees Tristan slaughtering the delinquents. He picks up a gun but there are no bullets and Tristan begins attacking him. Finn grabs a gun and runs to Bellamy's aid but the two of them are left outside while Clarke reluctantly goes inside the drop ship and closes the door as the Grounders breach the camp. Anya, however, quickly jumps over the door and is locked inside with the delinquents. Anya stands, ready to fight the delinquents with two blades. Clarke tells Jasper to push the button but it doesn't work. Outside, the Grounders are making their way up the sides of the drop ship while Anya begins to attack. She is easily overpowered by the numerous delinquents as Clarke stops Miller from killing Anya by reminding them they are not Grounders. Jasper realizes he forgot the magnet and reroutes the connection through a magnet, blasting the drop ship's rockets, incinerating the Grounders outside.

Up in space in the remnants of the Ark, Jaha attempts to contact any surviving stations and is able to reach Abby on Mecha Station who was with Kane and Sinclair . She tells them they landed successfully and goes outside and describes her experience of the Earth to an emotional Jaha. Kane joins her outside and spots smoke in the distance in the mountains. Abby thinks it may be one of the other stations and Jaha advises her to go check it out. Jaha then goes out to the airlock and watches Earth as he uncorks a bottle of liquor named “The Baton," which is “To be opened on Earth”, and opens it up, saying “this’ll have to do”. Jaha, alone on the Ark and having only one or two weeks left of oxygen, toasts to the survivors of the Ark, saying “may we meet again."

The delinquents and a bound Anya leave the drop ship to find the ashes and skeletons that were a result of the rockets’ ignition. All of a sudden, several red smoke grenades are thrown over the camp’s walls, and Anya says fearfully, "Mountain Men," as the red smoke begins to knock out the Delinquents and Anya. Clarke's last image is of several men in gas masks and military outfits with laser-sighted rifles enter the camp and a Mountain Man pointing his gun and laser at her.

Clarke awakens in a completely white room where she is being monitored. It is furnished with a bed, a toilet, a couch, and several other items. She is wearing a white tank top, white pants, no shoes, and has an IV stuck inside her, which she immediately pulls out. On the wall, Clarke notices Vincent Van Gogh's “The Starry Night." She then goes to the locked door and sees Monty banging on the door of a similar room across the hall but his door is also locked. A plaque on Monty’s side of the hall says "Mount Weather Quarantine Ward".