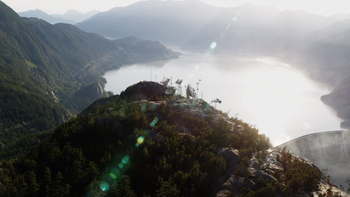 "Where the Hell am I?"
—Clarke

The episode opens with Clarke being watched through security camera footage in her room at the Quarantine Ward in Mount Weather. Clarke looks at the painting on the wall and then notices that Monty's room across from her is now occupied by an individual in a hazmat suit decontaminating/cleaning out the now vacant room. Worried for her friends, she screams at the person but there is no response, so she smashes the window of her room, cutting herself in the process. She unlocks the door and crosses the hallway to enter Monty's old room. She picks up a piece of glass and uses it to threaten the individual in a hazmat suit. She rips the mask off the person's face, revealing it to be a young girl who's wearing a pair of earphones. The frightened girl screams, "you'll get me contaminated!" Clarke further threatens the now crying girl with a shard of glass to her neck and forces her to take her to where her friends are being kept.

The girl leads her into a dining hall filled with many people eating. They're shown to be relatively civilized, all wearing nice clothes and eating good food. A woman looks over and sees Clarke holding the girl hostage and screams out in fear that there has been a containment breach. This causes widespread panic with many covering their faces as they run from the dining hall. A group of guards with full body suits and masks emerge with guns pointing towards her. Clarke looks around at the chaos she's just caused and asks, "Where am I?" in confusion.

Bellamy is running through the forest when he comes across Monroe and Sterling. Bellamy explains that they knew the fire was coming so he and Finn ran but were separated. They tell him that they saw the Ark come down and allegedly wanted to see if they could bring back help for the battle. They then see Finn and another delinquent being dragged along by Tristan. Tristan stops and kills the delinquent because he can't walk. He justifies the act by saying that three hundred of his people had died because of the delinquents. However, he leaves Finn alive to talk to the Commander.

Lincoln is helping Octavia learn the Grounder language. He comes and takes the arrow out of her and tastes it, only to discover that it's poisoned. He tells her he doesn't have the antidote because he gave it to Finn to help Raven. He says it's too far to go back to the dropship, but Octavia counters that it's further to the sea. She tells him that they can't go back to his village because they'll torture and kill him for being a traitor. He remembers that the antidote is made from bugs and goes to search for them instead.

A Grounder is seen inspecting the bodies outside the dropship. He walks inside the drop ship where he sees Raven. Presuming she's dead, he flips her over but she shoots him instead. She hears someone coming and gets ready to shoot before seeing it's John Murphy. He asks her not to shoot but she pulls the trigger multiple times anyway, however, there aren't any bullets left. He comes and sits down and says, "I would've shot me too."

Clarke is introduced to Maya, the girl she threatened earlier, who says she won't press charges. Clarke is then taken to a bed in the medical ward. Dante Wallace says he knows she's the leader (like him) and also a painter (like him). He tells her they're not prisoners. She says they wants to leave but he tells her it's safe here. She tells him about the Ark and he assures her he'll bring any survivors in too. He has a wardrobe brought out for her to choose from and leaves her to get dressed. She picks up a shoe and snaps the heel off, concealing it up her sleeve as a weapon.

Dante tells Clarke it is dangerous outside. She says it is survivable but he says not for everyone, not for the people in Mount Weather. He explains that the Sky People survived because the solar radiation in space is higher. She's about to go up to meet the rest but he stops her and tells her to give him the heel and she does so. When she meets up with the other 47 Delinquents inside Mount Weather, they tell her that Raven, Bellamy, and Finn aren't there.

Raven asks Murphy why he's there and he responds, "Dying, the same as you." She starts to cough up blood and he rushes to her, trying to help her get on her side. When she asks why he's helping her, he says, "I don't want to die alone."

Bellamy, Monroe, and Sterling are following Finn and Tristan. He tells them he'll distract Tristan while they free Finn and tries to encourage them by reminding them that they're warriors. Bellamy runs out and confronts Tristan, throwing a spear at him, but Monroe and Sterling abandon him. Tristan beats up Bellamy and takes him captive, too.

Lincoln is digging up the beetles for the antidote when he hears Octavia screaming. He runs to her and sees her trying to get away from something. He asks her what she saw and she says she saw a "monster" but he says it was probably the poison and tells her she's burning up. He picks her up and carries her away, saying he knows what he has to do.

Monty and Jasper are enjoying their food when Clarke comes in. She says it's weird that they gave them a map without any exits. She also refuses to eat their food. They dismiss her as being paranoid. Jasper goes to talk to Maya and Clarke also comes over and apologizes to Maya before leaving. Maya realizes that Clarke stole her access card and she and Jasper start to chase after Clarke. An alarm goes off and Clarke sees guards running towards her. She runs and makes her way through a restricted area, locking a door behind her and breaking the lock. She finds herself at a set of stairs leading up. Once she gets to the top, she finds a massive, sealed door. She figures out how to unlock the door and is about to pull the lever that will open the door when Jasper and Maya appear and beg her not to open it. If she does, then all the Mountain Men will die from radiation exposure. Maya even goes so far as to get a gun out and is prepared to kill Clarke if she opens the door. Jasper pleads with her, telling her that she saved lives when she pulled the lever that fired the rockets and to not make a mistake by pulling this lever now. Clarke allows herself to be taken into custody.

Murphy apologizes to Raven for shooting her. She asks him about his past and how he ended up as a murderer. He reveals that his father stole medicine for him to keep him alive, medicine that wouldn't have worked anyway. His father was caught and floated and his mother started drinking herself to death. Before Murphy found her dead, she had told him that it was his fault his father was dead.

Monroe tells Sterling they are warriors and they run, screaming, after Tristan to try to free Bellamy and Finn. As Tristan is coming after them, he is shot from behind by Kane. He comes out of the woods with other Sky People who had made it down to earth. Kane tells Sinclair to split up and go to where Alpha Station crashed while Kane and Abby go with the delinquents back to the drop ship.

Lincoln is carrying Octavia and trying to keep her busy by making her repeat Grounder phrases. She asks where they're going and he lies that he's taking her to the sea, asking if she can smell it. She says she can't smell anything and she's scared. Lincoln picks up the pace and begins to run.

Bellamy and Finn lead the others to the drop ship but know something is wrong when they see it is too quiet. They're made to wait outside the fence but they evade the guards and run around to the side entrance of the camp to see what is going on. Kane helps carry Murphy outside and when Bellamy sees him, he attacks him. They both get arrested and Kane tells them that they're not in control anymore. Raven tells Abby that Clarke's gone and that she got shot. Abby leaves a message for Clarke on the drop ship before they leave the drop ship to go meet up with the other Ark survivors.

Lincoln takes Octavia to the Abraham Lincoln statue near his village. She is upset with him because he'll be killed if he gets caught. Lincoln tells her that he won't get caught and to stay quiet until he can come back soon with the antidote soon.

After Clarke is arrested, she is taken to Dante Wallace. He is busy painting the outside world and tells her how he got to see the outside once when he was seven for five minutes. The Mountain Men saw the first of the Outsiders and thought the earth was survivable but it wasn't for the Mountain Men. He also tells her that they have found no survivors from either the drop ship or the Ark but he'll keep searching. He asks her to give herself time to grieve and that he doesn't want her to try leaving again. Later, in the delinquents' dorm, she opens an envelope addressed to her with a painting set from Dante. They go out to the Mess Hall and Clarke allows herself to finally eat their food.

Meanwhile, up in space, Jaha has been trying to reach any of the Ark survivors on earth but is unable to get through. He shuts off the power in the Communications room and is resigned to his fate. Then he hears a baby crying.