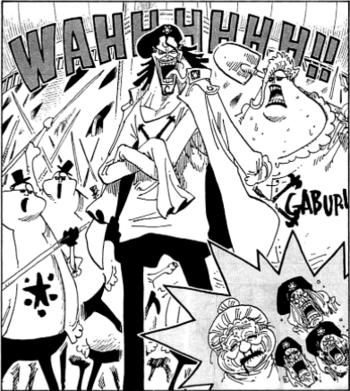 Following his defeat at the hands of the Straw Hats and Pekoms of the Big Mom pirates, Caribou attempts to set out into the New World.

At Fishman Island's mermaid cove, Caribou is once again trying to kidnap mermaids. This time, Jimbei is there to put a stop to it, and takes the pirate away from the island. Caribou is dropped off at the G5 Marine Base, but before the sailors can start torturing him, Coribou and the rest of his crew show up to save their Bro-Bro. During the fighting, Caribou takes their pirate ship, leaving his brother and men to the Marines. However, Caribou ends up sailing into a storm. He manages to make it to an island before passing out.

Caribou wakes up being tended to by a little old lady. While the lady sleeps, he steals her jewelry and when she wakes up she gives him a packed lunch, sending him on his way. On his way to the port, Caribou is confronted by some soldiers calling him Gaburu. Said soldiers are chased off by the old lady, but now Caribou's interest is piqued. Going back, he finds a weapon's factory and learns that he's an exact double for the revolutionary Gaburu. The workers begin to revolt, but this is the island ruled by Kaido, and Scotch quickly puts the revolt down. Fleeing back to the granny's house, Caribou finds it in ruins, and that Gaburu was the old lady's grandson. Scotch attacks the house, and granny puts herself between the two men, giving Caribou another chance to flee. At the beach, Caribou finds his crew escaped G5 by stealing their ship, and that Coribou holds no grudge for Caribou's earlier actions; their grandmother always told them to get along, right?

Back in town, Scotch prepares to kill Gaburu's grandmother as a warning to all, when a ship appears on the horizon. It's Gaburu!...as impersonated by Caribou. Caribou uses his Swamp-Swamp powers to take down both Scotch and the factory. But just as everyone is celebrating their victory, X. Drake appears and takes down Caribou. Just before Caribou is dragged off by the ex-Marine, Gaburu's grandmother gives her 'grandson' one last pie. After X. Drake sails away with Caribou, granny visits Gaburu's grave, revealing that she knew Caribou was a fake to Coribou and company.

Alternative Title(s): One Piece Caribous Kehihihihi In The New World