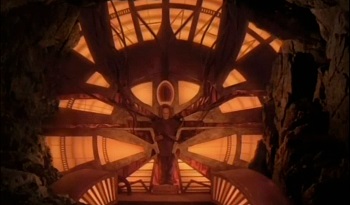 A Voice in the Wilderness, Pt. 1

Draal: What is the Third Principle of Sentient Life?
Delenn: (surprised and excited) Draal!
Draal: Incorrect answer. The third principle of sentient life is the capacity for self-sacrifice, the conscious ability to override evolution and self-preservation for a cause, a friend, a loved one. It has been too long, Delenn. You have forgotten your training. Soon you will have forgotten all about your old friend, Draal.

The planet Babylon 5 orbits, Epsilon III, has been having some unusual seismic events and Dr. Tasaki, a geologist wants to get closer to take some readings. As they approach the planet, a large energy beam suddenly fires from the planet, nearly destroying the shuttle. They manage to avoid crashing but don't have enough power to get back to the station. A fighter wing is deployed to retrieve them.

Meanwhile an elderly Minbari has arrived looking for Delenn. She is currently in a negotiation with Londo over some trade routes, with Sinclair moderating while keeping apprised of the situation on the planet. The agreement goes smoothly, which Londo attributes to negotiating with Delenn rather than G'Kar for once.

Afterward, Sinclair is getting a status update from Ivanova. They have determined that the beam is some sort of comm signal, but they can't decipher it. She also notes that the day's Earthforce status report didn't mention Mars, which is strange. The reason becomes clear later that evening as a news report suddenly brings word of fighting having broken out on Mars Colony. Sinclair watches for a bit then turns it off, but as he does so, a ghostly image appears in his quarters. It asks for help then vanishes.

The Minbari from earlier surprises Delenn as she returns to her quarters. She is delighted to see her old teacher Draal, and they spend much of the evening catching up. Draal mentions that Minbar is changing for the worse, the people are becoming discouraged and self-centered. He intends to go to the sea, travel out into the sea of stars in search of a place where he's needed. Delenn protests that he's too young for that, but his mind is made up.

The next morning, Sinclair and Ivanova discuss the Mars situation. Sinclair was born there, but doesn't have any family there. Garibaldi seems to be taking it pretty hard, thugh. He is in fact trying to get an open channel to Mars, but there is a comm blackout and he doesn't have enough clearance to get around it. Eventually he goes to Talia and explains that while he worked on Mars he got involved with a woman named Lise Hampton. It ended badly when he accepted the position on Babylon 5, something that he regrets. Talia offers her sympathies but wonders what he wants from her. He asks her to get in touch with a Psi Corps facility, a classified one, as Talia indignantly tells him, but she agrees to help him.

Dr. Tasaki prepares to head back out, and Ivanova warns him not to enter the atmosphere as the fighters will not be able to follow. He decides to get some more detailed readings and enters the atmosphere to do so. Immediately a pair of missiles are fired at the shuttle. One of them strikes them, but Ivanova orders the Starfuries to fire at the planet, destroying some missiles and drawing others off. Tasaki's shuttle is able to use the cover to escape. Ivanova is not happy, and gives Tasaki some words to ponder on his way back:

Ivanova is always right. I will listen to Ivanova. I will not ignore Ivanova's recommendations. Ivanova is God! And if this ever happens again, Ivanova will personally rip your lungs out! Babylon control out.

Back on the station, Tasaki shows Sinclair what he found. The missiles were coming from a deep fissure. The facility that launched them must be at the bottom. Since it might be a first contact situation, Sinclair decides he and Ivanova will personally go.

The ghostly figure appears once again, this time to Londo.

Sinclair's shuttle launches and the Starfuries use the same tactics from before to distract the missiles and allow the shuttle to safely fly past them and into the fissure. They find some sort of landing bay at the end and are able to land. Donning breathing masks, they head out to look around.

Talia speaks with someone at the Mars Psi Corps facility. They refuse to allow a link, as that would confirm the facility's existence. The woman there does offer to look up Lise's name to see if there's any information. Later she finds Garibaldi to tell him what she found out; Lise didn't appear on any survivor lists. He tries to brush it off, telling himself she's fine, she has to be.

While this is going on, Sinclair and Ivanova make their way through tunnels and past booby traps to find a massive underground device. Delenn introduces Draal to Londo, who has been trying to understand humans, by studying the Hokey-Pokey.

As Sinclair and Ivanova explore further they find a large interface device, and strapped into it is the alien who's been appearing to various people. They take him back to the shuttle but just as they are ascending, C&C detects something big coming through the jumpgate.

Garibaldi looks down at the display, and says, "What the hell?"