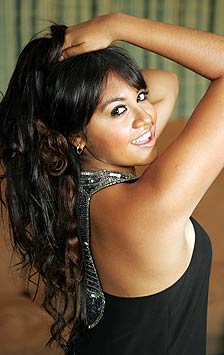 She's been waiting so long.
Advertisement:

Jessica Hilda Mauboy (born 4 August 1989 in Darwin, Australia) is an Australian R&B and pop singer, songwriter and actress. Born in Darwin of Indonesian and Aboriginal descent, she began singing (most often while in her church choir) and playing piano at a young age. Her early influences ranged from the standard diva-types like Whitney Houston and Mariah Carey to The Bee Gees, Dolly Parton, and Patsy Cline.

In 2004, at the age of fourteen, she won a competition to perform at the prestigious and immensely popular Tamworth Country Music Festival in New South Wales. She also signed with Sony and released a country-inspired version of Cyndi Lauper's "Girls Just Wanna Have Fun". However, when the single failed to make any sort of an impact, Mauboy returned to Darwin, and her contract with Sony expired.

Two years later, Mauboy auditioned for Australian Idol in Alice Springs with a rendition of Whitney Houston's "I Have Nothing". She ultimately made it to the final two of the season, but lost out to Irish expatriat Damien Leith. However, an album featuring re-recorded versions of all her performances from Idol, entitled The Journey was released the next year. It debuted at number four on the ARIA Albums Chart and was certified Gold.

Later in 2007, she joined Young Divas, a pop covers Girl Group composed of Australian Idol alumni, after Ricki Lee left the group. She went on to achieve a top-twenty single ("Turn Me Loose") and a gold-certified album (New Attitude) with the group before they officially disbanded at the end of the year.

In 2008 Mauboy released the album Been Waiting, a critical and commercial success which spawned a number-one single ("Burn"). The rest of the released singles received multi-platinum, platinum and gold certifications. The album itself went double-platinum. The album and Mauboy herself received many award wins and nominations for Been Waiting, including "Highest-Selling Single" for the FloRida collaboration "Running Back" at the ARIA Awards.

In 2010, Mauboy made her acting debut as Rosie in the Australian musical comedy Bran Nue Dae alongside Missy Higgins and Geoffrey Rush. The film was a hit, and became one of the Top 50 Australian films at the box office. Later that year she released her sophomore album Get 'Em Girls, which featured collaborations with Snoop Dogg, Jay Sean, Ludacris and Iyaz to mixed reviews. Though the album itself only achieved gold accreditation, the singles it spawned (from both the standard and deluxe reissue) achieved platinum and multi-platinum accreditation — bar the Title Track, which was the album's lead single.

In 2012 Mauboy made a cameo in Underbelly as a glamorous 1920s nightclub singer. She also stars as Julie McCrae in the Australian comedy film The Sapphires.

In December 2017, it was announced that Mauboy would be representing Australia at the Eurovision Song Contest 2018 in Lisbon. This will actually be her second time on the Eurovision stage; she previously performed as an interval act during the 2014 edition, a year before her country officially participated for the first time.

This musician/actress displays examples of: