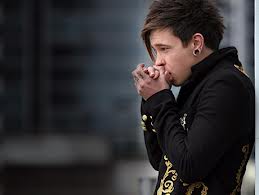 Now he's a rock star, breaking all the girls hearts

Reece Mastin (born 24 November 1994) Winner for 2011's Australian X Factor, Guy Sebastian was his mentor, is a British-Australian singer-songwriter, guitarist, and producer notable for being the winner of the third season of The X Factor (Australia) in 2011. He then signed with Sony Music Australia and released his debut single "Good Night", which reached number one in Australia and New Zealand, and received platinum certifications in both countries. It became the fastest selling digital single by an artist signed to Sony Music Australia.(2011-Present)

Mastin's self-titled debut album was released in December 2011 and debuted at number two on the ARIA Albums Chart and was certified double platinum. Mastin's second studio album, Beautiful Nightmare, was released in October 2012, which includes the singles "Shut Up & Kiss Me" and "Shout It Out". The latter became Mastin's second number-one single on the ARIA Singles Chart. "Good Night" and "Shout It Out" earned Mastin two ARIA No. 1 Chart Awards.

Not alot is known about his childhood except he was born on 24 November 1994 in Scunthorpe, England to parents Debbie and Darren Mastin. Mastin has three sisters. At the age of 11, Mastin and his family moved to Greenwith, South Australia, citing the weather and to seek better opportunities as reasons for the move. Mastin taught himself how to sing at a young age, by singing along to his favourite songs on the radio. He began writing songs at the age of 12. Mastin attended Golden Grove High School. He was inspired by his music teacher to pursue his musical interests, which included playing in several bands with friends and performing solo acoustic gigs.