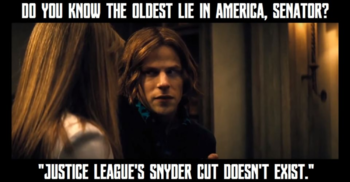 Possibly the least scathing meme related to this franchise. Also, the Snyder Cut does exist now, so...

Films without a specific page:

Explanation Based on Zod's quote "Release the world engine" in Man of Steel, used whenever fans welcome significant news regarding the DCEU. It can also be used for other kinds of hypes.