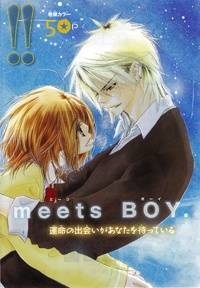 "The starry sky lies beyond this vast blue. Normally, you can't see it, but it's there, like a heart."
—Opening Narration
Advertisement:

Sora Log is a Shoujo manga series by Kako Mitsuki, which was serialized in Betsucomi from 2008 to 2010.

Hikaru Minami loves the sky and is a part of Higashi High School's astronomy club. During school, she has a chance encounter with infamous fellow student Asou Minato, nicknamed "the bad king of bad rumors" and a delinquent who has bleached hair and rumored to have been violent in middle school and had to go to reform school. Due to this, students and teachers alike are distrustful and intimidated by him. However, Hikaru is drawn to Asou after hearing a bell that he often carries with him and soon wants to get to know him and befriend him. Others attempt to dissuade Hikaru from having anything to do with Asou, as they think he will have a bad influence on her, but Hikaru wants to believe in the Asou that she sees and knows that he's not a bad person.

Hikaru learns that behind his dangerous appearance, Asou is a kind person and as Asou begins to warm up to Hikaru, they gradually become closer. However, Hikaru's older brother Yui believes that Asou shouldn't be anywhere near Hikaru because Asou might indirectly trigger a traumatic memory that Hikaru has long repressed from childhood and Yui would rather her not remember it, and Asou's sister-in-law Shizuka Asahina doesn't take kindly to the progress of Hikaru's and Asou's growing relationship and seeks to sabotage them so Asou can return to the world of music and progress his skills as a pianist.