Manga / My Girlfriend is a T-Rex
aka: T Rex Na Kanojo 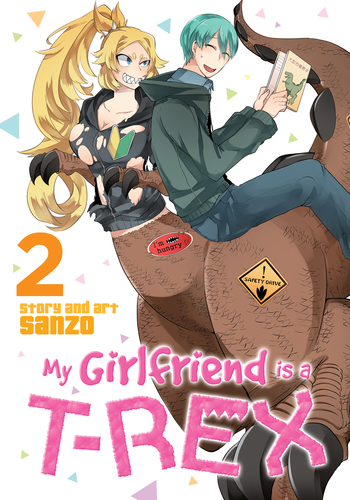 Our loving couple
"In the summer of that year, strange things happened all over Earth."

My Girlfriend is a T-Rex (Japanese: T-REXな彼女, T-REX na Kanojo) is a slice of life manga by Sanzo (kanji:三三) that started out on Pixiv — much like another manga series revolving around monstrous girls — about a young man named Yuuma Asahikawa who falls for a homeless girl named Churio. Churio just so happens to be a Tyrannosaurus rex, which isn't all that strange in the world of this manga, where dinosaurs continued to evolve into dinosaur/human hybrids in order to adapt and live alongside humans instead of going extinct. Dispite the title, Yuuma and Churio aren't actually dating (yet), though they both have obvious feelings for each other. Blatantly obvious feelings. Title-of-the-manga obvious.

Yuuma is the nicest guy, always greeting every person and situation with the same "lame smile," even when he's attacked by a ferocious T. rex that stalks the streets at night looking for food. Churio is that T. rex, and is as tsundere as she is stupid, proud, and ferocious combined. Despite the odd way in which they met, Yuuma begins to develop feelings for Churio and goes out of his way to help Churio whenever he can, going so far as to give her food, clothes, shelter from the elements, and taking her to the hospital when she develops a bad cold. While Churio certainly starts to like the boy that gave her ice cream and nursed her pride, she doesn't develop romantic feelings for him for a few more chapters.

Together, they live in a world of humans and dinosaur-humans (often just called "dinosaurs") who have human heads and torsos - with the occasional odd feature, like scales, feathers, horns, spikes, or fangs - and are large bipedal reptiles everywhere else, sporting all manner of features, depending on their species. For instance, Churio is a T. rex; she has two-clawed hands, massive clawed feet, and spines going down her back to the tip of her tail. She's also incredibly strong and durable - an often dangerous combination with her size, rampant emotions, glaring stupidity, and a somewhat careless approach to how fragile the world and humans are that seems to be shared among dinosaurs (and generally a source of comedic value).

They're occasionally joined by Churio's friend since childhood, Trica, a Velociraptor obsessed with jewels, clothes, and shopping; Yuuma's fellow human classmate, Numano, who acts as both the straight man and a foil to Yuuma's always cheerful attitude; Hiroya Kagashima, a former underclassman to Yuuma who serves as the butt monkey when other humans aren't; Nowol, a precocious, two-faced pterosaur child who can't fly; and Kram, a lonesome Ankylosaurus who has trouble communicating and can't emote due to her ancestors' facial armor.

Has been licensed by Seven Seas Entertainment for English audiences.

After 28 chapters, the series has officially concluded.