The Woobie
aka: Woobie 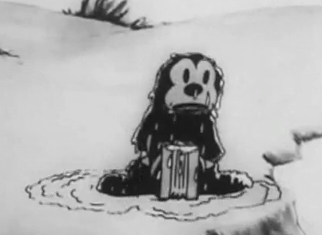 Life is already hard enough when you live in the shadow of your famous younger sibling.
Advertisement:

A "woobie" is a name for any type of characters who make you feel extremely sorry for them. Basically, the first thing you think to say when you see the woobie is: "Aw, poor baby!" Woobification of a character is a curious, audience-driven phenomenon, sometimes divorced from the character's canonical morality. And while it's technically a YMMV trope, it's hardly tough to spot the guy the writers intend them to be, considering all the bad stuff that tends to happen to them.

A story with the Woobie allows the audience to vicariously experience relief from some pain by fantasizing about relieving the Woobie's pain. (No, not that way! Well, okay, sometimes.) Woobification can also tie into a disturbing hurt/comfort dynamic, in which fans enjoy seeing the Woobie tortured so they can wish the hurt away. This is often explored in Hurt/Comfort Fic.

An important aspect of the Woobie is that their suffering must be caused by external sources. A character who suffers as the result of their own actions is a Tragic Hero and does not qualify.

Sometimes a Woobie goes Omnicidal Maniac and seeks to destroy the world in a bid to make the pain stop, in which case you're dealing with a Woobie, Destroyer of Worlds. Sometimes it's possible to bring such a woobie back from the edge, but other times, only their destruction in a Shoot the Dog moment will stop things.

In Lighter and Softer fiction, the Woobie can sometimes earn their happy ending.

In many versions there is also something about the Woobie's suffering that is notably heroic or noble. In this case the character is an Iron Woobie. When the Woobie does not show much outward emotion about their hurts (or anything else, for that matter), they are a Stoic Woobie.

In anime, the Woobie makes up a large part of Moe characters. Part of their appeal can come from them constantly striving against their chains. Can be taken to the point of Break the Cutie, and if the amount of misfortune seems too great it may result in Deus Angst Machina.

If in your opinion the character desperately needs to die, that's likely Damsel Scrappy. Should not ever be confused with Butt-Monkey. However, a Butt Monkey can often become a Woobie if abused too mercilessly.

A character who is considered a woobie can also be considered a Tragic Hero on some occasions, though not every woobie may have a Fatal Flaw that defines such classifications.

For the curious, the fanspeak term "woobie" is ultimately derived from a word for a blanket, stuffed animal, or other soft object that a child keeps for its comforting properties (hence the name—some of these characters really could use a snuggling!).

Check out our analysis page on this trope if you're looking to write a Woobie of your own.