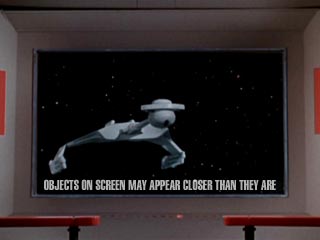 "Space is big. Really big. You just won't believe how vastly, mind-bogglingly huge it is. I mean, you might think it's a long way down the road to the chemist, but that's peanuts to space."
— Reported opening lines of the eponymous The Hitchhiker's Guide to the Galaxy
Advertisement:

For example, consider that a lightyear is on the order of 10 quadrillion metres or nearly six trillion miles. Let's assume your family car uses about 2 and a half gallons (11.37 litres) of fuel per 100km - about 25 mpg - and a gallon (2.55 litres) costs about $4 USD (i.e. 1.6 USD/1 Euro per litre) to traverse it. This means that one lightyear is roughly where you'd end up if you spent the entire national debt of the US on petroleum fuel.note At 60 miles per hour, it would take 11 million years to drive there. At the opposite end, an atomic nucleus is on the order of a quadrillionth of a meter. That's ten-to-the-power-of-negative-fifteen of a meter, or a femtometer. Such outrageous SI prefixes

Another example that often comes up is the idea of beings coming to our galaxy from another galaxy. While there's no reason why a writer can't introduce beings from the nearest galaxy intent on contacting/conquering the Milky Way, there would have to be a pretty dang good reason to travel the incredibly vast distances separating galaxies — distances which make traveling between stars seem like a little hop.

Some would consider this one of the Acceptable Breaks from Reality. If the characters didn't travel through space at thousands of times the speed of light, it wouldn't be very interesting unless the focus was just the spaceship itself. Either you'd have to make the ship incredibly powerful to max out Time Dilation and shorten the time spent from the characters' perspective, put the characters into some kind of suspended animation (and just fast forward through their journeys), or even have entire generations of characters that would live and die on the ship before they even reached a known extrasolar planet (meaning the audience would say They Wasted a Perfectly Good Character or treat the new generations as a Replacement Scrappy), and so on... If Star Trek, for example, was realistically scaled, it'd be a lot less interesting.

Two related tropes are Medieval Stasis and Modern Stasis, where society stays the same for thousands of years. It is a subtrope of Artistic License – Space, which features a list of tropes that try to treat space in a way that it wouldn't realistically work. See also: MST3K Mantra, Bellisario's Maxim, Watsonian versus Doylist.