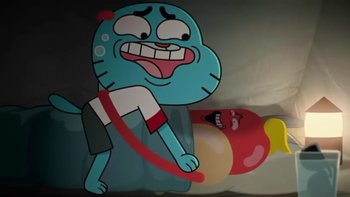 "Not only did I not sleep, I may never sleep again."
For a show that has a Y7-rating (in the United States. In the UK, the show has a PG certificate when released on DVD, not just for the sexual innuendo and Ho Yay, but also for scary moments and comedic violence), it has a surprising amount of subtext that could make you raise an eyebrow.

To be fair though, the show title does have a large rainbow behind it.