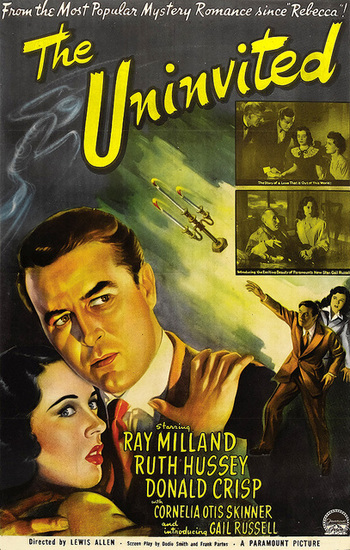 The Uninvited is a 1944 horror film directed by Lewis Allen and starring Ray Milland.

Rick and Pamela Fitzgerald (Milland and Ruth Hussey) are fully-grown siblings who for some reason still live together and take vacations together. While on vacation in Cornwall, they stumble upon Windwood Manor, a beautiful old house on the coast with a commanding view of the ocean. It is unoccupied, and when they find the owner, Commodore Beech (Donald Crisp), he is willing to sell for a surprisingly low price. Rick and Pamela move in, and Rick soon finds himself falling for Beech's lovely granddaughter, Stella (Gail Russell).

The reason for the bargain price becomes apparent soon enough: the house is haunted. There are ghostly chills, inexplicably fading lights, the smell of mimosas coming from nowhere, and the sounds of a weeping woman. Eventually Rick and Pamela discover the tragic backstory of the house. It seems that the Commodore's daughter Mary married an artist named Meredith. Mr. Meredith was an artist, and one of his models was a "Spanish gypsy" named Carmel. Mr. Meredith and Carmel had an affair, which scandalized the town. Seventeen years prior, when Stella was only three, events climaxed when a jealous Carmel tried to throw little Stella off the cliff. Mary saved Stella but fell off the cliff herself to her death. Carmel died of pneumonia thereafter. Now the spirit of a vengeful Carmel seems to be focused on Stella.

The Uninvited is one of the earliest "scary ghost" films ever made. Previous ghost movies either played ghosts for comedy (Topper) or revealed the ghosts to be a trick or hoax (The Cat and the Canary).

Not to be confused with 2009 horror film The Uninvited, which is completely unrelated (it's a remake of Korean film A Tale of Two Sisters), or the 1997 sci-fi TV series.