Fan Fic / The Awakening of Monika 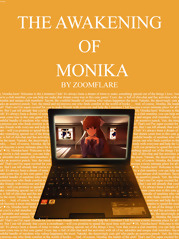 Just Monika.
Protagonist: “Okay. What did I tell you last night?”
Monika: ‘That you hated work and wished you could resign? That you never told anyone else about me? By me, I meant the computer, of course.’
Protagonist: “Y-you’re…”
Monika: ‘Real? I've always been, love.

The Awakening of Monika

and published on FanFiction.Net starting on November 19, 2017, is about a unnamed protagonist who leaves a laptop running the game Doki Doki Literature Club! on Act Three. After three months, Monika began to talk to the protagonist. This leads to the protagonist getting along with Monika and finding ways to make her comfortable as a being on a computer.

The Awakening of Monika is a first person narrative following the perspectives of the protagonist and other characters the protagonist later meets in the story. Between chapters are Secret Poems, similar to Doki Doki Literature Club's special poems, written by the club members from Doki Doki Literature Club with few by other characters. Each poem illustrates the thoughts of a character in the story, though it is not said who wrote them however it is easy to discern who wrote them.