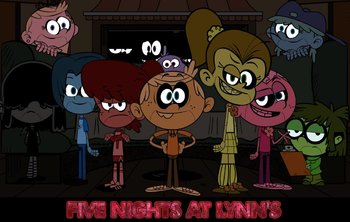 It'll be a night to remember...
"It was just a simple job on paper for Tucker, get some money, pay his tuition for college, that practically sells itself, all he had to do is just watch over a restaurant called Lynn's Table, and get some sleep while nothing is going on, only to be surprised that to his misfortune, things were starting to put a new meaning to Animatronics... "
— "Description from Fanfiction.net"

is a The Loud House fanfic written collaboratively by EliteSlayer103