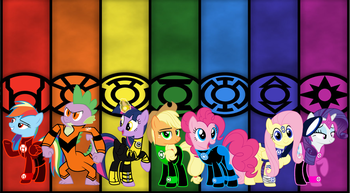 In Brightest Day is a crossover between My Little Pony: Friendship is Magic and the Green Lantern series written by Alphamon_Ouryuken

After the Blackest Night, a lone Black Lantern Ring flies towards the outer reaches of space and eventually lands on the Moon of Equestria, invoking the release of the Nightmare Moon herself! The Emotional Spectrum, sensing the darkness growing stronger, sends one special ring from each Lantern Corps to Equestria to combat the darkness...

Back on Equestria, the citizens of Ponyville find themselves under attack by demonic ponies. As many ponies flee from town, several rings land across Equestria, each one being found by ponies drawn together by the threads of fate.

But not all the ring wielders will show restraint with their powers, as the darkness grows stronger, who's[sic] side will be taken?

This story can be read on fimfiction

, and Archive Of Our Own

Now has a side-story titled In Brightest Day The Second Front.

Now has a Character Page that Needs love.