Creator / I Am The Gang 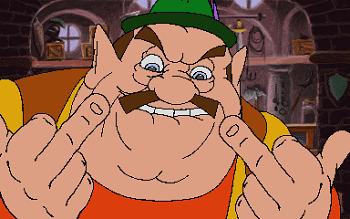 Pictured: Morshu and his middle fingers. And no, they're not aimed at you. It's only that this pooper's "Apoopcalypse Now" was the first appearance of this custom sprite.

There are many notable YouTube Poopers out there. There's Deepercutt, there's Walrusguy, and there are some who lack the fame reached by those two. Of course, NintendoBrad managed to come close to them in terms of popularity, but there's still another underdog in this field that can't go unmentioned. His username is IAmTheGang.

Easily one of the most creative minds in the YouTube Poop field, IAmTheGang was famous (or perhaps infamous, to those in the past who weren't fond of his deviation from the normal YouTube Pooping styles) for his extensive use of Microsoft Paint in his videos, using it for special effects that went beyond the kind of special effects that were done by other YouTube Poopers who utilized MS Paint. Combined with unusually dramatic storylines (which can be seen in his Timesplitters: Impending Perfection

, for example), his videos were unlike other YouTube Poops that anyone had seen at the time.

In a sad twist of fate, however, he's not active anymore within the YouTube Poop community, sadly joining the ranks of WalrusGuy and NintendoBrad and completely disappearing in a manner similar to the latter. Even more sadly, unlike WalrusGuy, for some reason he doesn't even want his name to be associated with YouTube Poop anymore, logic be damned. It may have to do with the fact he stated to have always disliked the term "Poop", in a strange case of Not Using the YTP Word, but who knows. What counts is that many YouTube users like IAmThaGang

note and ImTheGang, until recently instead decide to Keep Circulating the Tapes anyway, akin to WalrusGuyMEMORIAL (who, unlike IAmThaGang, got greenlighted by the original WalrusGuy himself).