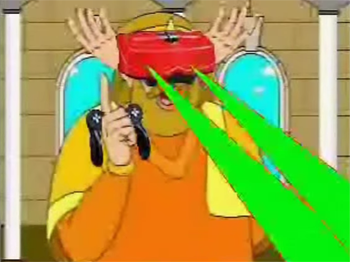 Just another average day in Hyrule.

Another former YouTube Pooper, NintendoBrad, simply put, specialized in seriously mind screwy YouTube Poops. In particular, considering how nonsensical YouTube Poops already tend to be by default, those created by NintendoBrad have the deliberate intention to invoke a "What the hell?" reaction by the viewer.

Like fellow former Pooper IAmTheGang, he used to be somewhat of a rival for Deepercutt and Walrusguy in terms of popularity, despite them being obviously out of his league, considering the accessibility of their styles of humor compared to his. He still has a cult following however, as not only many of his poops got re-uploaded with the "nintendobrad's account is closed" caption included within the title, but there are reaction videos to his account being closed, too. Not too shabby for a YouTube Pooper who, despite some level of popularity, was relatively low-key.