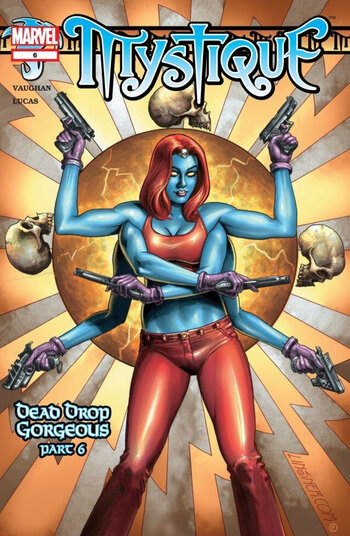 Talk about Multi-Armed and Dangerous.
There's a reason why my people call her kind tricksters. Raven Darkholme may be able to alter her appearance a million times a day...but she never really changes.
— Forge, Mystique #1
Advertisement:

Mystique was a Marvel comic published from 2003 to 2005. It was written by Brian K. Vaughan, with art by Jorge Lucas. Issue #14 through #24 (the final issue) were written by Sean McKeever.

Raven Darkholme is and has only ever been out for herself. But when Professor Xavier saves her from certain death, he requests that she be one of his secret agents and go on missions too top secret even for the X-Men. And it's really not a request.

So Mystique is stuck doing Xavier's dirty work, but this time she has backup in the form of her former lover Forge and her handler Shortpack. Now, all they need to do is find out what happened to Professor Xavier's other secret agent and how to stop this new mutant terrorist called the Quiet Man.

Good thing Mystique is up for the job.