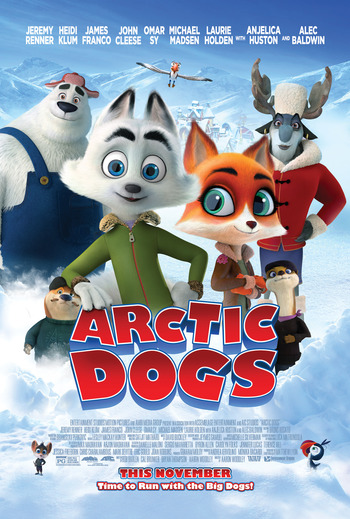 Arctic Dogs (also released as Polar Squad in the UK and Arctic Justice in other territories) is a 2019 CGI adventure comedy directed by Aaron Woodley and made by Assemblage Entertainment, the studio behind Norm of the North. It follows an Arctic Fox named Swifty (Jeremy Renner) who dreams of becoming a delivery dog for the Arctic Blast Delivery Service but no one will even give him a shot. That is, until the sled dogs quit and his boss, the intimidating caribou Magda (Anjelica Huston), is forced to give him the job. But what Swifty stumbles upon on his route is far beyond anything he's prepared for.
Advertisement:

The film, co-written by the man also known for Escape from Planet Earth and The Nut Job 2: Nutty by Nature, also features the vocal talents of Heidi Klum as Swifty's love interest Jade, as well as Bertha, Alec Baldwin as Swifty's best friend PB, James Franco as Lemmy the Albatross, John Cleese as the villainous Otto Van Walrus, Omar Sy as Leopold, Michael Madsen as Duke and Laurie Holden as Dakota.