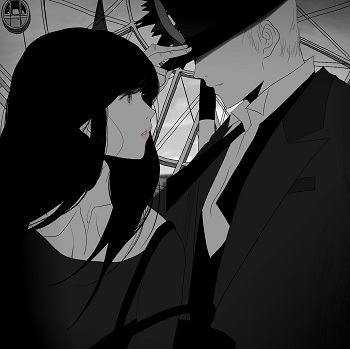 Seeing eye to...hat.
"Do you believe in magic?"
— The Magician
Advertisement:

Annarasumanara is a Korean webcomic by Ha Il-kwon, who also created Duty After School and God of Bath. It is a Coming-of-Age Story of high school student Yun Ai note also romanized Yoon Ah-ee who, due to her unfortunate living situation, must work part-time jobs to scrape by for herself and her younger sister while maintaining exceptional grades in hopes of a better future. She wishes to grow up quickly and put the hardships of her youth behind her.

One day, she encounters the rumoured magician that wanders the shut down amusement park. Sensing his trustworthiness, she quickly becomes drawn to him in spite of his shortcomings, like his childish outlook on life, and rumours of his sketchy past. Yun Ai comes to realize with the magician's help that she has bigger dreams than merely living a typical life and that she must follow her own path if she ever wants to find true happiness.

This comic is hosted on Naver in its original Korean

and translated into English

A drama adaptation, titled The Sound of Magic in English, was released on May 6th, 2022 on Netflix.

This works contains examples of: